The Vermillion Community Church services was well attended Sunday, October 25th followed by a delicious pot-luck dinner. This will be the last service held at the Community Church until April of 2016. However, the church may be used for various services upon request. Vermillion Christian Church services continue to be held at 10:30 a.m. weekly and all are welcome to attend. Remember, it’s only because of the support of the community and the surrounding area that our local churches continue to hold services. Faith, trust and communion with others is essential in building and strengthening ones family. It is hoped that you will find the presence of the Lord Jesus Christ very real during the worship service.

The Vermillion Public Library will hold it’s November meeting on November 4th. Anyone interested in the Library’s services is invited to attend. The NCKL book van was here on October 22 and there are new books on the shelves. Stop by and check several out or ask the librarian what interesting books or DVD’s are available. We have new 2015 books on the shelves. Plan to bring your children by the library from 9-11:30 on Saturday morning for a nice Halloween treat.

Plans are being made to hold the fall Friends of the Vermillion Community, Inc. meeting in November, so watch for the time and date.

The September 2, 2015 Board Meeting of the Vermillion Public Library was called to order at 9:15 a.m. by President, Marsha Engelken. Present at the meeting were Marsha Engelken, Marylyn Wenzl, Audrey Broxterman, Matthew Ekstrum, Jannett Argo, Kelli Massie and Alice Schmitz. Debbie Evans was absent.

The minutes from the August meeting were read by Alice Schmitz, Secretary. The minutes were approved as read.

The Librarian’s report was given by Audrey. Board meetings will be held on the first Wednesday of the month. The book van brought new books on August 20th. Marylyn, Jannett and Debbie have the children’s books ready for the fall program. Kelli and Jannett read to kinder prep on August 25th. The next kinder prep reading session will be September 8th. The after school kids came to the library August 26th for a Lego party. The Lego party was a success and discussion was held on how to store the Lego’s.  Library Summer Reading statistics report was sent in.  The Library web page crashed, but Ladonna  (NCKL) was able to restore it.  Audrey gave a report on the meeting she attended in Marysville regarding ordering of books through Title Source 360.

Matthew Ekstrum did not have a Treasurers report at this time.

Correspondence:
Curiosity Creates Grant is due by September 15th. We also discussed other possible grants we could apply for.

Unfinished Business:
The committee that worked on the policy for lending equipment from the library, recommended that each large piece be engraved. A lending agreement is to be read and signed by the borrower, and a copy of the agreement given to the borrower of the popcorn machine. A deposit of $25.00 will be paid by the borrower when the machine is taken, and will be returned to the borrower when the machine is returned to the library, on the next business day and in clean condition for the next user. The projector, PA system and speakers are not to be checked out. The policy was presented to the board and was approved unanimously. Marylyn and Audrey volunteered to take photos of inventory that will be stored in a safe place. $1000.00 Service Grant could possibly be used for carpeting or new window.

New Business:
Audrey suggested we order one hand held Launch Pad through a Tech grant and see if there is a need for more later.

It was moved and seconded to adjourn the meeting at 10:08 a.m.

The board meeting for the Vermillion Public Library was called to order at 9:10 on August 12, 2015, by President, Marsha Engelken.  Board members present were Marsha Engelken, Marylyn Wenzl, Matthew Ekstrum, Audrey Broxterman, Alice Schmitz, Debbie Evans, and Kelli Massie.

Secretary, Alice reported we did not have a meeting in July,  and the minutes from the June meeting were unavailable at this time.

The Librarian’s report was given by Audrey.  The book van was here on July 25th.  New books are on the shelves. The westerns and inspirational books have been weeded.  She ordered a box of catalog cards and a packet of checkout cards.  Jannett and Marylyn worked on the kinder prep books.  Audrey and Marylyn attended the Manhattan meeting on disaster planning.  Audrey plans to attend the Marysville Director’s meeting for training on Baker & Taylor Title Source ordering.

The city will put floor jacks in the basement to support the library floor.  The PA system needing to be returned to the library after each use.

The Treasurer’s report was given and approved.

Chan Stowell was present to discuss the library’s insurance policy.  He recommended a Halon fire extinguisher for the library.  We have $61,000.00 personal property coverage with a $2,500.00 deductible.  Also discussed renters insurance.

We can apply for the Service grant in December of 2015 and January of 2016 to use for special projects.

Debbie, Alice, Audrey and Marsha will work on a policy for public use of the PA system and popcorn machine.

The meeting was adjourned.

On August 14, 2015, Bob and Sharon Polson were hosts to three of Sharon’s former classmates who graduated from Axtell High, and all were celebrating a ‘milestone’ birthday this year! Dorothy (Wilhelm) Klamm, Bonner Springs, Gail (Bergman) Deitz, Topeka, Karen (Nanninga) Owings, Hays met at the Polson home last Wednesday. They chose the Ace’s cafe in Axtell for lunch, then most of the afternoon was spent driving around the area to reminisce and look for homes and familiar buildings that would have been standing when they lived here years before. The ladies stopped at Terry Nanninga’s where he and his wife were gracious enough to invite them into their remodeled home for a brief tour. In the early evening Alf and Marsha Engelken came up to meet the ladies before they left for the Willows in Seneca. Waiting to welcome them at the restaurant were Don and Leah Wassenberg, Marysville, Sharon (Strathman) Schmelze, Seneca, who were also classmates, and Olivia Huddleston joined them as well. The three who came from a distance, were overnight guests at the Polson’s where old pictures were shown and many good memories were shared, accompanied by a generous amount of laughter, until well past the usual time for retiring to bed. Guests were served a late brunch on the patio the next morning before returning to their individual homes. All agreed it was a special occasion!

The Vermillion Library Board met on Wednesday, August 12 with all but one member present. The Kinder Prep and three year old reading program will begin on August 25. Marylyn Wenzl and Jannett Argo have been busy cleaning and repairing the books for the children to check out. Audrey Broxterman attended the Baker and Taylor workshop and Directors meeting which was held in Marysville on August 13th. 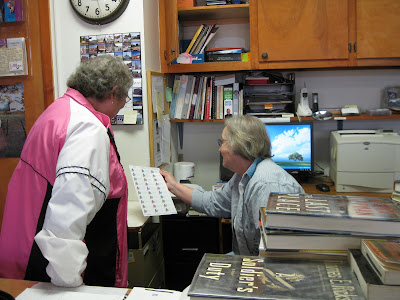 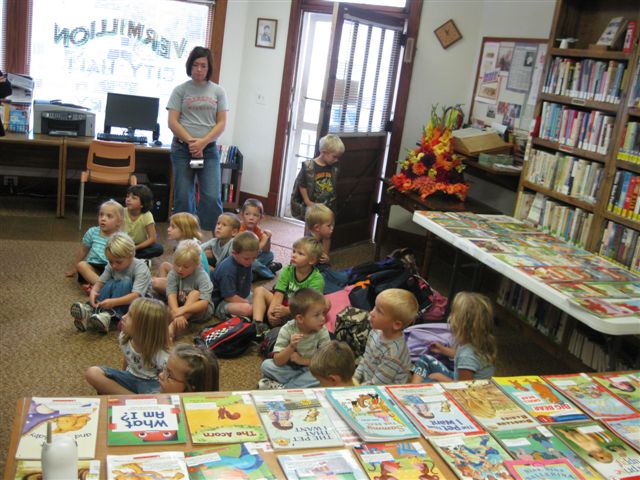 The window has been installed at the library.Â  Should help get some of those drafts stopped.Â  Thanks to all who participated in the Snow Pile contest and congratulations to Gary Haug who guessed the time within 1 hour and 37 minutes! 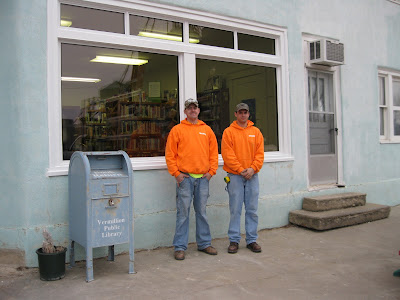 The November 11th meeting, of the Library, was brought to order by our Vice President , MarshaÂ  Engelken, the Secretary Marylyn Wenzl, read the minutes of the last meeting, they were read and approved.
The Treasurer, Milton Anderson, gave his report and bills were submitted,Â  and approved,Â  a thank you was signed for Lyle Wenzl, he had made a storage cupboard for the bathroom, for our use until not needed, andÂ  then it goes back to the family. Lyle also put up a grab bar, in the bathroom.
Becky Shepherd attended our meeting via Web-Cam.
Jannett Argo attended the meeting, she willÂ  be a new board member, subjectÂ  to the approval of the city council.
Audrey readÂ  to the Kinder-Prep, at the school house, October23rdÂ  ,Â  Jannett Argo read to the 3 year oldsÂ  at the Library, Oct.Â  26th, Marylyn assistedÂ  them.
Audrey thanked the ones helping her when she needed off.
Audrey explained the search engine webÂ  sites.

We discussedÂ  the progress of bids on the storm door, two more will be contacted for bidsÂ  for this and the window project. Audrey will collect the bids. Audrey will contact Doug Berkley and Jannett will contact Rick Argo. Ferrell Meritt attended the meeting and discussed the upper windows and the doors. The bids are to be in by December 1.

Dorothy Tilley attended the meeting and stated she is setting up an account for the repair of the Depot as several has expressed an interest in preserving it, and she had a picture of her dad on the last run (of the train) in 1960, Audrey will make copies ofÂ  these pictures.

We discussed theÂ  organization ofÂ  the books, and we will continue at the next meeting.
We discussed the Tech-Grant, Matthew and Audrey will apply for this grant.

Audrey read a letter sheâ??d gotten from Canada, from a relative of Joe Rodgers, Audrey was going to send her some information.
We discussed some fund raising ideas, Jannett, Marylyn, Audrey and Becky will be on the committee.

With money from the same grant that was used to purchase the wireless router, the library also purchased a couple SanDisk m230 MP3 Players. This can be used to carry audiobooks and music with you wherever you go. It is sent out with headphones, as well as a cassette deck adapter, which allows you to play it through a cassette player.

The sites below contain free audiobooks and music and have been bookmarked on the library computers.

You will be responsible for replacing the battery when it wears out. It requires a single AAA battery.

The MP3 player will be available for checkout in 2 week intervals. If you are going on a trip, it may be checked out for longer periods of time. You may reserve it in advance by talking to a librarian.